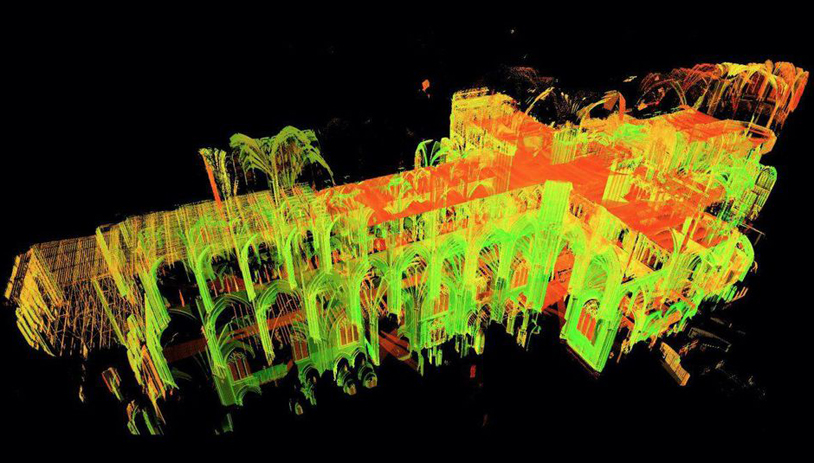 Can anyone fail to be moved when an ancient building is devastated by fire? From York Minster, the Mac in Glasgow (twice), to last month’s fire at Notre Dame: these much-loved buildings took incalculable time, skill and care to create yet are decimated within hours.

You may have heard, however, about the serendipitous 3D aspect to the Notre Dame story. We’ve talked on past blogs about the opportunities 3D scanning offers museums and historic sites and thanks to the foresight and meticulous work of the late art historian of Dr Andrew Tallon, the entire interior and exterior of Notre Dame was 3D scanned just a few years ago – and in incredible detail.

Tallon’s 3D point clouds, with their billion points of light revealed 800 year-old structural details previously lost in time. In an interview with National Geographic in 2015, he explained how the magnificent flying buttresses had held the walls true, but the Gallery of Kings on the western facade were ‘’a foot out of plumb’’. Professor Tallon was on a mission to discover precisely how Gothic buildings stand up. You can watch him talking about his work, here.

National Geographic: ‘’Tallon, who died Nov. 18, 2018, at 49, wasn’t the first to realize that laser scanners could be used to deconstruct Gothic architecture. But he was the first to use the scans to get inside medieval builders’ heads.’’

You may have noticed the discussion around the restoration and how instead of restoring Notre Dame to a facsimile of its previous self, it should instead reflect the techniques and challenges of our time. From France, to the Netherlands: Dutch company Concr3de have an interesting proposal (you can read it here). Specialists in stone 3D printing, they’ve suggested using ash, dust and damaged stone from Notre Dame to create a new material, which, with Professor Tallon’s data, could be used to 3D print lost parts of the cathedral. Their test-piece gargoyle, reproduced from a 3D scan of the famous demon Le Stryge, is a replica created from a new material, which in turn was created from 800 year-old debris. Nice work. And there’s also an honesty to this: the restoration acknowledges the fire and incorporates the event back into the very fabric of the building.

Concr3de claim this method would be quick and with President Macron’s promise of rebuilding Notre Dame in time for the Paris Olympics in 2024, speed is (for some) an important consideration. Architecture and heritage experts, however, are urging Macron to abandon this deadline altogether. In an open letter, they urge listening to experts and taking the time to diagnose.

An international architectural competition to redesign the spire has also been announced, attracting architects from all over the world to release visualisations, ideas and proposals. It’s interesting to see the diversity. From gold flames, to a spire of light,  roof-top gardens to a glazed ‘greenhouse’ garden. You can see some of the ideas in Domain, here.

But back to Professor Tallon’s idea of “getting inside medieval builders’ heads”. Earlier this week we came across this feature in The Guardian about Guédelon Castle. The construction of Guédelon is an extraordinary experiment. In a forest in northern Burgundy, a team of fifty master-builders are building a castle completely from scratch using only medieval techniques and materials. (If this sounds familiar, you may have caught the 2014 BBC series, ‘Secrets of the Castle’). These master-builders are as close as we’re ever going to get to the very people Professor Tallon was trying to understand.

Guédelon’s co-founder, Maryline Martin, said if anything good is to come out of the burning of Notre Dame, it is that the traditional trades practised there will finally be recognised as worthwhile. “The roof beams did their work. They burned and turned to dust and left the building intact. What architect today could say this would happen with one of their buildings?” Martin goes on to point out: “Buildings burn, always have burned and will continue to burn. It’s terrible to watch, but through the scars we can read their history.”

Perhaps the reconstruction of Notre Dame will combine it all: Tallon’s 3D scanned data, Concr3de’s 3D printing in stone and Guédelon’s unique skill-set. It’s an unlikely but potentially fortuitous combination that will hopefully let the future continue to read the past.

Do you have a scanning project we can help with? Please get in touch!