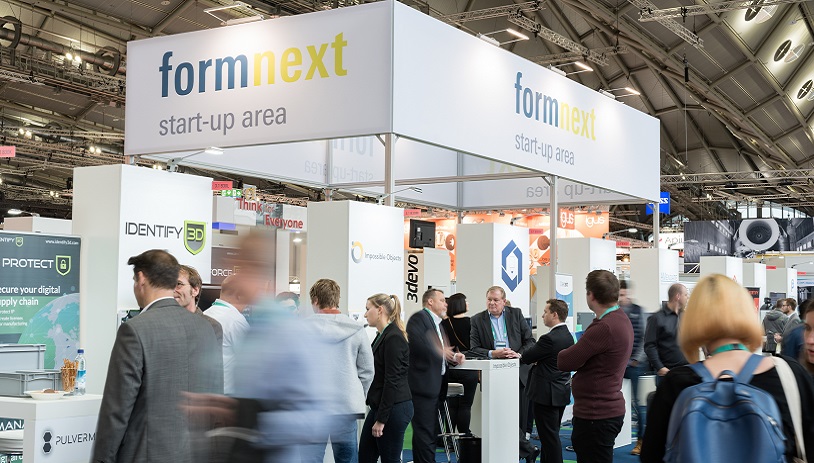 Frankfurt’s Formnext is pretty much the definitive global show for Additive Manufacturing and it’s getting bigger and bigger each year. Had work schedules allowed, we’d have been there for a good look round. Instead, we’ve trawled the internet looking for interesting developments from this year’s show.

Here’s just a few of the trends spotted, announcements made, AM happenings and Formnext stuff in general that caught our interest or got us thinking…

David Sher in 3D Printing News talked about the trend for companies specialising in specific verticals. His prediction for what’s next? Machine tools.

Specialisation is obviously the way to go for large printing operations. For us though, the diversity of enquiries that we receive tells a slightly different story. Our clients really appreciate the broad range of knowledge we’ve gleaned from all our different projects. They also like the variety of printers we have in our Lab (we’re the only UK company with such a broad range of printing technology under one roof, as I’m sure we’ve told you before!). Is something lost as well as gained in the rush to specialisation?

Working closely with Stratasys and having recently acquired an F900 will, of course, make us extra-interested in the announcement that Stratasys have launched a parts and digital inventory system for the rail industry. This system will enable rail operators to produce parts within 24 to 48 hours – regardless of the age or uniqueness of the train. The system includes the Stratasys Fortus 3D printers and materials such as its ULTEM 9085 resin and Antero 800NA, both of which we offer. All materials in the Rail Industry Solution have passed the European Union’s Rail Standard, EN 45545-2.
You can read more here.

On the subject of standards, it’s also interesting to note that SAE International recently released the first Additive Manufacturing Polymer specifications for the aerospace industry. You can read more about this on the organisation’s website where they stated that: “These standards were created following a request from airlines through the International Air Transport Association (IATA)’s EMG to be able to realize additively manufactured plastic cabin parts.”

Transport’s certainly committing to AM in a big way. (We’ve looked at this in a previous blog) here’s what Production Manager Jake Augur had to say:

“Rail’s hot on the heels of the automotive and aerospace industries. For transport in general, the need for low volume high value parts is a great fit with AM. It’s interesting to see the different transport sectors different approaches to AM. Aerospace has used AM for end use parts and is now turning to the technology for producing jigs and fixtures. The Automotive industry has worked the other way around, only relatively recently turning to 3D printing end-use parts for Formula 1, GT cars and other racing series. Rail’s in good company and have been able to cherry-pick their approach.”

There’s a growing interest in how manufacturers can introduce 3D technology to the factory floor, integrating AM with their existing systems. This article in 3D Printing Industry goes into some depth, but in principle, it’s all about the software, in particular, the development of API’s in getting different systems to talk to each other:

“You have to have a printer that’s built like a machine tool,” their interviewee said, “So it’s the CNC mill, it’s an injection moulding machine, and it plays nice with other systems.”

To successfully integrate 3D printing into a production environment, whatever type that may be, will require vastly improved connectivity. And perhaps that’s the point: the potential of AM is being discovered by all sorts of different industries who use vastly different production systems. It’ll be interesting to see how the AM equipment manufacturers or AM software specialists such as Materialise run with this although at the moment, we’re sceptical:

“Yes, API’s are likely to be a big next step but at the moment, it’s all much too costly and currently there’s not a lot of choice.” Jake Augur.

EOS are quoted in this 3D Printing Industry article as saying: “The new technology will combine the best of two worlds – the detailed resolution of Stereolithography (SLA) with the durability and quality of Selective Laser Sintering (SLS).”

We love a bit of fine detail. We also love getting the best of two worlds. However, in general, AM is aimed at comparatively large products: jigs, fixtures, end-use parts. Aside from medical, we’re not convinced which industry markets stand to gain from such fine detail.

Jake commented: “It’s certainly interesting, but we’d question the design philosophy that lies behind it. We’ll remain open-minded though. It’s one to watch!”

Maybe next year, projects and busy lab allowing, we’ll make it to Formnext. There were 850 exhibitors and 34,500 participants this year, up from 27,000 participants in 2018. Formnext 2020 will, of course, be bigger still. It’s exciting and a fantastic testament as to just how fast AM is developing and growing.

If you have a project we can help with, please get in touch!